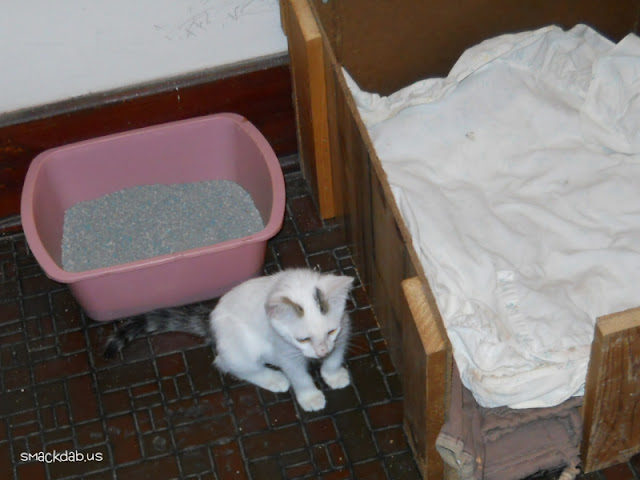 Every now and then I may create a post about our cat Daisy. She has been with us since September of 2014, and this is the very first picture of her taken after she joined the family. In this picture she is in her room.

She was "discovered" walking down a sidewalk, and ended up temporarily at the local humane society.

We went looking for a full grown cat at the humane society, and preselected about a half a dozen ones from their websites that sounded nice. However, other folks had already adopted every one of the grown cats we wanted to see.

There were many other adult cats to pick from, however, we decided to wander through the kitten section just for fun. Our plans changed as we admired the kittens, and we selected three we wanted to visit with and perhaps adopt.

We would have to wait a while for our turn to visit the kittens we were interested in, and the worker told us to have a seat on one of the benches for our 15 minute or so wait.

As we sat and waited, we noticed a little white kitten sitting and staring at us intently. After a few minutes of being stared at, we decided to go have a closer look at her. She continued to stare at us as we admired her, and she seemed like such a serious little kitten, much different than the other kittens.

This kitten wasn't overly demonstrative, but didn't mind being held and seemed unusually well mannered for a kitten. The worker informed us that this kitten was up to date on all her shots, was healthy, and had been neutered. It was nice to have that information.

Soon we were on our way home with our new kitten in a cardboard box.We were all set up at home with a cat sized bed, litter box, and cat food. We were expecting her arrival at home to go smoothly.

However, this kitten had other plans after being confined to a small enclosure for several weeks. She had a lot of energy to burn off, and went more than a little bit berserk once she was home and allowed out of the box.

We began to wonder what we had gotten ourselves into as she tore through the house nonstop, leaping over furniture and refusing to come close to us.

After what seemed the longest time she finally slowed down, had her meal, and was ready for a nap.

She definitely wasn't the mellow little kitten we had expected!

However, as time passed she calmed down, adapted to the rules of the household, and has become mellow.
at April 25, 2019

Email ThisBlogThis!Share to TwitterShare to FacebookShare to Pinterest
Labels: Cat, Picture, Throw Back